The first (and pretty much only) time I saw a Swallow-tailed Kite on Dewees, I was showing property to prospective buyers and one came swooping up Pelican Flight lane about 15 feet above the ground.  I squealed, and jumped out of the cart while it was still moving to watch the kite zoom overhead.  My alarmed guests did not, in fact, choose to make Dewees their home, but I floated on the excitement from seeing that gorgeous bird for days. It’s unmistakable, with an almost all white body and black wings.  They are not an uncommon sight in the summer months in Mount Pleasant, and we’ve seen them on the trails at Caw Caw  and the Edisto Nature Trail. – Ever since I read this post by Cathy and Carl Miller about looking for the kites of Allendale, I have wanted to see this phenomenon. So last year, we packed a picnic and got in the car to go find them.  We drove all over the state, and we heard one on the Edisto trail, and found a few in Allendale.  In fact, as I was trying to set up my camera, one basically buzzed my head and flew off before I could catch a photo.  So I did a little research.  It turns out that there are places in central Florida with large communal roosts that are pretty protected in terms of location.  I found a photographer guide who picked us up in a boat and we took a sunrise ride for about two hours to a location where a group of kites was roosting. As we approached a small cut in the waterway, we saw a large oak, with a lot of birds in the branches. “Oh good, they are out here”, our guide said.  “They’re sleeping now, but when they wake up they’ll probably be thirsty.  If there aren’t raindrops left in the leaves where they are, they should swoop down to drink, skimming the water as they fly.  There hasn’t been rain for days, so we might get to see that.  All along the trees were sleeping kites.  We estimated a population of about 1500 along the river.  As we watched, they began to wake up, stretch, groom, and move around a bit.

I really couldn’t get my head around the sheer number of birds we were seeing.  And I’ve never seen a wild bird sleep: usually that happens when I am not aware of where they are– so it was so interesting to see them with their heads tucked in as the sun came up. As they woke up, they began to move around on the branches, startling if another bird species came by (a green heron caused about fifty to lift off) and rising slowly to the thermals, sometimes soaring right overhead. Swooping in for water

I wasn’t aware of the skimming behavior of Swallowtail Kites, when they swoop down for water, but our guide Ron was delighted to teach us.  He was hoping that the few days without rain would encourage the birds to swoop down to the water’s surface, grabbing a sip and moving on.  Some came back for a second pass.  There were four or five boats of people watching, and the most common sound was that of camera shutters clicking as the birds whooshed past.  And maybe the constant gasping that came from me. Eventually, there were just a few left in the trees where there had been hundreds, and then they flew up too, joining the others in the “kettle” of soaring birds above the treeline. A Group of Swallow-tailed Kites is a "Kettle"

Both specifically and generically, a group of raptors soaring overhead on the rising thermal winds is called a “kettle.”  Some people have theorized that because the birds soaring overhead whirl upwards in a circle, it looks like a boiling cauldron.  Specifically, kettle is one of the nouns used to describe a group of swallow-tailed kites, but it could also refer to other raptors or groups of raptors. And then they were gone, leaving behind the empty trees and a few whispers of ripples on the creek.  We were left with the most exquisite sense of having witnessed something amazing, and a heart full of wonder, full of questions.  Will these birds return to this roost tonight? Will others join them?  Or has this group already moved southward toward their wintering grounds, to be replaced with northern arrivals this evening?

Because the range for these kites has diminished, there is a lot of interest in understanding where they go and how long the journey is.  This site from cellular tracking technologies provides a map that shows where their tagged birds go.  And hopefully, technology like our MOTUS tower will give us more data as more places install receivers. Even the Early Naturalists Guessed at that Migration

Marc Catesby, one of South Carolina’s early naturalists, described them as the Swallow-tailed Hawk.

‘Like Swallows, they continue long on the wing, catching, as they fly, Beetles, Flies and other Insects, from trees and bushes. They are said to prey upon Lizards and other Serpents; which has given them (by some) the name of Snake-Hawk. I believe they are Birds of passage, not having seen any of them in winter’. 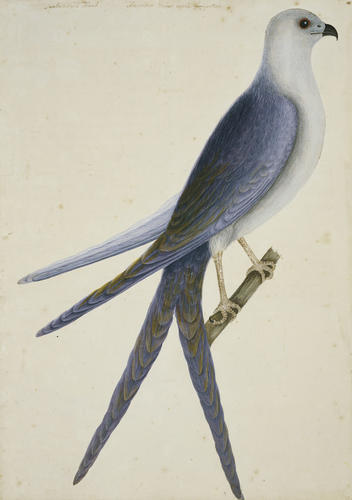 What an amazing thing to witness; we were floating for a few hours afterward on a cloud of wingswept joy.  We wish them well on their journeys to the tropics, and can’t wait to see them returning in the spring.

Eagle Nest Updates 9 and 10: The Eaglets Can Fly!